Veteran Liam Maybank was victorious at the Maidenhead and District CC 15-mile time trial in Berkshire on Saturday. 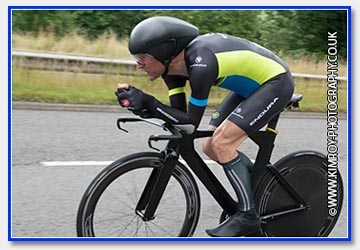 The 44-year-old has already had success this season, finishing on the podium at the Kingston Wheelers race last month and the Dorking CC last weekend.

On both occasions, the Twickenham CC man came home third, but he made it to the top of the pile with an impressive victory at the Fifield Circuit.

Maybank stopped the clock at 33.08, to give him a winning margin of one minute 31 seconds. Ryan Davies (AS Test Team) and David Boileve-Cooper (Race Hub) completed the top three with times of 34.39 and 35.14 respectively.

Sophie Whitworth took the prize for the fastest woman, the GS Henley rider finishing with a time of 42.39.

In other categories, the pair of Ian Boshier and Aron Kelly of Southampton Tri Club claimed a victory in the two-up discipline.

Their time of 30.40 for the 15-mile course gave them a 26 second winning margin over Thames Velo pair Kevin Digby and Michael Cutter.

There were two trikes participating too, with Geoff Booker (Oxonian Cycling Club) coming out on top, his time of 47.12 was over a minute ahead of Gary Guntrip (Team Jewson – MI Racing).