Victory for Simmonds and Bigham at Coalville 10 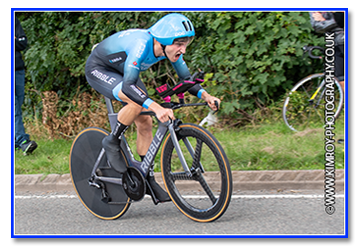 The undulating nature and sporting nature of the A10/34 provided a different test for 28-year-old Bigham but he still prevailed in a time of 18 minutes and 46 seconds.

The A10/34 sees riders start on an unclassified road heading north before joining a section of the A453 and then heading back onto a minor road through the centre of Breedon on the Hill.

Competitors continued on the unclassified road which runs adjacent to the A42 before joining the B5324 for the finishing stretch.

Bigham, based in Stone, Staffordshire, had strong competition in the form of team-mate John Archibald, who both had unbeaten records for the season at stake.

Archibald eventually fell finishing just six seconds short of victory and had to settle for second in 18-52.

“It was really good and the course had a bit of everything,” said Bigham.

“There was some power climbs, corners and technical bits on quiet single carriageway roads and lanes. So it wasn’t your typical out and back course and the course event went through a town with a lot speed bumps.

“There was also a nine per cent climb, so it was pretty fun and had a bit of everything. The course was an honest sporting test and had every aspect of time trialling.

“I was a bit fatigued and definitely carried yesterday’s race (National 10 Championship) in my legs. Competing against John (Archibald) I had to dig in and I got the power right.”

Meanwhile, after returning from taking a 16th place in the European Individual Time Trial Championships in France last week Simmonds prevailed in the women’s event.

Her time of 21-45 was good enough for ninth overall in a strong field and beat newly crowned National 10 Champion Emily Meakin (The Independent Pedaler- Nopinz) into second.

Meakin finished in a time of 21-58, a minute slower than her winning effort in the national 10 the previous day.