“It was a little bit of fun, the majority of my training is on the road bike rather than the time trial bike,” said Simmonds.

“I do a couple of sessions a week on the TT bike but in terms of time I spend a lot of time on the road bike.

“It is just interesting to see what kind of times it is possible to do on the road bike for some of these courses.

“Everybody knows personal bests for certain courses and course records but it was nice to see how close you can get to those and where you can come in the TT results list on a road bike rather than a time trial bike.

Simmonds targeted 10-mile time trials on her road bike and recorded 20 minutes and 30 on her way to winning the …a3crg event in July.

“I think on the right day I could go a bit faster,” added Simmonds. “As good as my road bike was and the set-up we had it, I think it’s a 10-year-old frame now and it wasn’t top of the line when I got it. 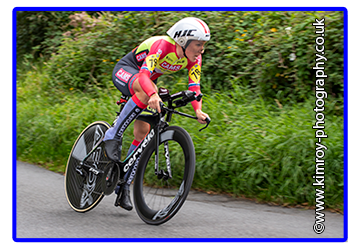 “So actually there are actually some modern and aero specific frames that might be faster, and I didn’t have amazing weather conditions for a lot of the races that I did.

“I won’t be doing many road bike 10s next year as I have lots of other things but it is something I would potentially like to come back to.

“It was just a bit of fun, something different to try and AeroCoach and Goodwood Circuit events were really good fun.

“I did a really good 17-mile road bike time trial in the Peak District (Peak RC) event (clocking 45-51). That was a really nice event, glorious evening and one of my favourite events last season.”

With road bike categories becoming more popular at time trial events Simmonds hopes that the inclusivity of the category will encourage more people to compete.

“I hope it brings a new crowd into time trailing,” Simmonds added. “It means that people don’t feel they are being really disadvantaged by lack of a time trial bike. Not everybody can afford flashy time trial frames or TT wheels.

“Hopefully it will make people feel they are able to compete and prevent them from being put off by feeling as though their time might be slower.”

Alongside her road bike heroics Simmonds had a successful season which saw her win the National 10, 25, Circuit and Team Time Trial Championships.

“The 10 was a really fun course which I really enjoyed and was a bit different,” added Simmonds.

“My best performance was probably in the 25 which was not the nicest weather wise but in terms of performance.

“I didn’t have a great race in the Circuit Championships which was probably the worst of the lot but the 10 and 25 were both good.”