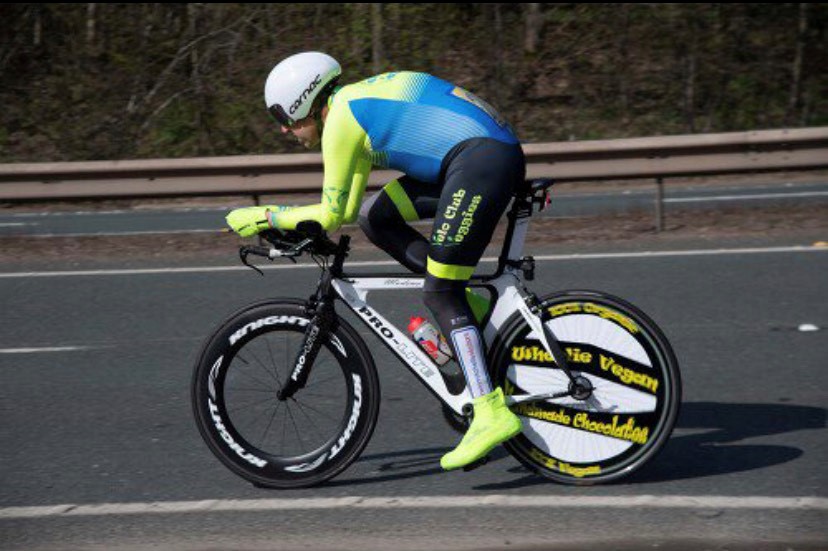 Where do I start? The Time Trial season last year had so many highs for me ……….  I had set myself the goal to take the 10 mile and 25 mile Junior records and also to become a National Champion over one of these distances too.

I managed to take the 10 mile Junior record in June 2018 and win the 10 mile championships in September. I frustratingly equalled the 25 mile record !! and sadly could not make the 25 mile championships due to racing abroad. My season was complete when I finished on a real high in the south of France in October when I competed in the Chrono Des Nations ( the biggest time trial outside of the World Championships )  I am super proud of coming 3rd behind the World Champion Remco Evenpoel.

I also managed to secure the Best British All Rounder for the junior section of CTT and was very humble to attend the CTT Dinner in January 2019 to collect my awards.

I knew I wanted to not just improve in my time-trialing, but to make my mark in the road racing  scene ,because I didn’t just want to be known for my time trialing.

I was lucky enough to get the opportunity to go abroad and race for a U23 Development team in Huesca ,Spain called Equipo La TOVA. Although I couldn’t speak a word of Spanish at the time… I jumped at the chance!

So the season so far has been great overall! I went out to Spain at the end of January 2019. My season started early, doing my first U23 race on the 23rd of February. As you can imagine doing your first U23 race in a foreign country leads to some high pre race nerves! The first race went very well and I was pleased to find myself finishing in the first part of the peloton. From there my season just got better and better, winning my first U23/elite RR just two weeks later and getting a number of top 10s on the back of that race win. The level in Spain is very high, it's a totally different type of racing than compared to the UK.

You definitely have to be able to climb, because its very hilly and with me coming in at a  70+ kg rider it can make racing up a 12 km climb against 50 kg guys interesting!

I did a lot of the early season Copa Espanã’s which was a fantastic experience! The Copa Espanã’s are the highest level races in Spain and all the very best U23 teams compete in these for the series leadership. Teams like Caja Rural and Lizarte. I held my own in these, getting into breakaways and really getting stuck into the races. My best result in one of these Copa Espanã’s was 34th out of 250 riders.  I got into an early break and stayed out all day.

So overall the season was going really well and I was coping with the amount and the level of the races very well! I then unfortunately had a nasty crash about 6 weeks ago, crashing at 60-65kph, 1.5km from the finish… I wasn’t best pleased about that to say the least but hey, that’s racing and it is what it is! So I got up off the road and saw that I was pretty cut up but got back on my bike and finished the race. When I crossed the line I was then dragged away to the ambulance. I had some nasty road rash all up my right side of my leg and elbow, including a nice big wound to my right hip. I was feeling okay but more concerned about the hot 5hr journey home in a car and the  phone call to my parents explaining what had happened! So after getting home and going to see a doctor the following day i had a couple of unplanned days off the bike to recover. Since crashing I haven’t felt the same on the bike and have struggled in races and training. I then took the sensible choice to take my mid season break so that it would give my body a chance to recover and repair.

After that I felt a bit more normal on the bike but what I didn’t realise was that I had done a fair bit of damage to my right quadricep muscle. So since giving that some time to recover and rebuild, I have got back into training.

I am really pleased to get to come back to the UK this June to get ready for the National Road and TT championships in Norfolk on the 27th and 30th of June.

I managed to squeeze a 25 mile TT in, down at one of my favourite courses R25/3H down near Merthyr. This was the first proper chance for me to get back onto my TT bike and really see where I was sitting having been beasting myself abroad in the Spanish mountains. It was fab to see so many old friends there and a bit daunting to see myself up against Scott Davies !! for my first go into the adult field, of 240 riders I am really happy to come away with a 5th place.

I am home in the UK for just over 2 weeks and now in Norfolk getting ready to take part in the National Championships…….  Some would say throwing myself into the deep end !!!

I return to Spain on the 3rd of July.

My goals for the rest of the season are to get back to where I was in the Road Racing prior to my crash, and hopefully win some more races. I am really hoping that if all goes well in the Nationals that BC might consider me as an option for the World Championships at the end of the year to compete in the TT and Road Race.

I have also set myself the challenge of returning home to compete in the National 10 and 25 mile TT Championships!! I would be super proud to podium in these but who knows !! just need to see what my legs have in them !

Lastly I would like to thank CTT personally for all their help and support. I have always found the CTT family one which is super supportive and their faith in me and helping me with sponsorship has meant that I am able to take these journeys home to compete in my time trials. So thank you!