Simon Beldon was the only rider to complete in under 20 minutes as he won the Ravensthorpe CC 10-mile event in Ferrybridge on Saturday. 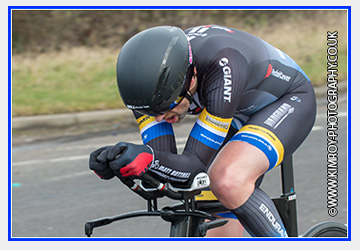 The veteran Team Bottrill rider averaged at over 30mph to stop the clock at 19.52 and took victory by over a minute.

Beldon has made a flying start to the year, and this was his sixth victory in a row with other wins coming in the Yorkshire Cycling Federation, City RC, Birdwell Wheelers, Harrogate Nova and Warrington events.

Second quickest was Hayden Allen of T.H.R.E. Datawolves RT who posted a time of 20.56, a minute and four seconds off Beldon’s pace.

Another veteran rider, Albarosa CC’s Ian Mitchelson, completed the podium, 27 seconds down on the pace of Allen in 21.23.

Fiona Sharp of Team Swift was the fastest woman in 24.46 and her team mate Maria Mulleady was second in  25.18. Albarosa CC rider Suzie Richards was third in 25.55.

There was also a two-up event with 13 teams completing. It was won by the partnership between Pete Nixon (Seacroft Wheelers) and Ed Nicholson (York Cycleworks) with a time of 21.15.

Beldon also entered the two-up with young Ilkley CC rider Alex Beldon and they just missed out on the podium finishing fourth in 23.26.