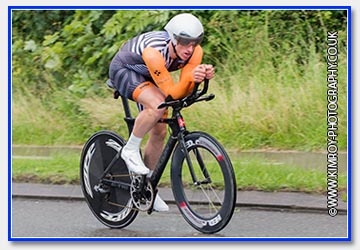 Adam Duggleby continued his impressive start to the time trialing season after picking up victory at the Ilkley CC 10 in a course record time on Sunday.

The double Paralympic Gold Medal Winner for Great Britain was in fine form and put to use the good conditions on the Addingham course between Ilkley and Skipton in North Yorkshire.

The 32-year-old from Leeds won in a course record time at the Malton Wheelers 10.5 event just two weeks ago, and repeated his feat here.

Duggleby (Vive Le Velo) stopped the clock at 23 minutes and two seconds, topping the field of fifty finishers and smashing the previous best time by 34 seconds, a time previously held by Philip Graves.

Despite losing his course record Graves (Nopinz), who was second to Duggleby two weeks ago, came home second fastest again posting a time of 23.50, well clear of the rest of the field.

A time of 30.47 was good enough to give Lisa Dickinson (Team Lusso) the prize for the fastest woman on the Addingham course.