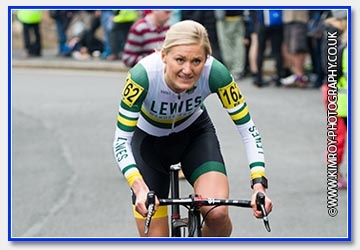 George Welfare and Joscelin Lowden were the fastest man and woman in the East Sussex CA’s 10-mile time trial staged on the G10/87 near East Hoathly, East Sussex, on Saturday.

Welfare, the 31-year-old Eastbourne Rovers rider from Bexhill on Sea, clocked 21.21 to take the win by 13 seconds. Equal on 21.34 and sharing second spot was Dan Sadler (RT316) and Marc Townsend (Eastbourne Rovers CC).

Lowden is also in great form this season. She won the Redhill CC sporting 18-mile event in February, but since then has won two rounds of the East London Velo Winter Circuit Series, as well as the Ipswich Bicycle Club Spring Scramble. She was also the team’s best-placed rider in the opening round of the National Road Race Series, the Tour of the Wolds, two weeks ago.

Top junior rider in the ESCA event was Fabien Large (Direct Power CT) with 24.16, which was just one of several great performances. With warm weather and only a slight wind, many riders did well with a tailwind out and only a slight headwind on the return leg of the A22, from East Hoathley down to the northern fringes of Hailsham and back.