The 30-year-old from Edinburgh was the only rider to beat the 46-minute barrier, clocking a winning time of 45 minutes and 48 seconds in wet conditions.

Christopher Fennell (The Independent Pedaler – Nopinz) put in a valiant effort to defend his unbeaten record but took second this time out in 46-09.

The L2529 saw riders start outside Keswick before heading on the A66 out and back to Cockermouth and back with a section running alongside Bassenthwaite Lake.

Persistent rain throughout the day culminated in a heavy rain shower 10 minutes before the final men’s riders took to the course.

Archibald won three national titles last season but has had to combine his time trial goals with riding for pro-continental road team Eolo Kometa this season. 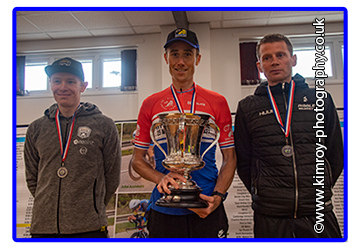 Last season Archibald won his first National 25 Mile Championship title on the A25/37 course near Nottingham clocking 44-50 on that occasion.

Despite being almost a minute slower this time out Archibald did enough to defend his title recording an average speed of over 32.75 miles per hour.

“It was not ideal conditions for it,” said Archibald

“About 10 minutes before the start we had this massive downpour which everybody was fearful of but it actually settled down a bit midway through the ride.

“There was also a headwind as you turned towards Cockermouth. Once you got to the turn and back up the hill you flew along with a massive tailwind.

“It was seemingly not as quick as last year’s National 25 and lumpier than last year’s course.”

Runner-up Fennell has already won the National Circuit Championships and National 100-Mile Championships titles this season and was unbeaten in 15 events before racing in Cumbria.

Going one place better than his third position in the National 25 last season Fennell was runner-up on this occasion in 46-09.

He improved on his time and sixth-place finish in last year’s National 25 to take third this time out in 26-13.

Several riders saw their hopes ended with punctures including Kyle Gordon (RT 23) who did not finish the event.