Andover Wheelers had the satisfaction of seeing one of their own riders on the top of the podium at their 24-mile event on Sunday, with Matthew Buckley being the fastest rider on the day.

Buckley’s time of 58.32 saw him claim the best time by a margin of 1.15, averaging at just under 25mph on the course that ran into the countryside near Ludgershall. Sarah Matthews of a3crg took the women’s prize with 1:09.59. 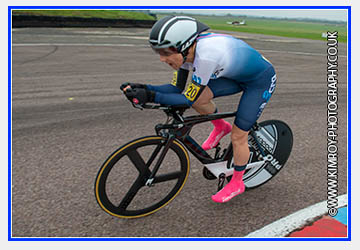 Buckley enjoyed a strong finish to his season last year, winning the Bournemouth Arrow CC ten-mile event back in August.

And here, he was in good form again, beating Didcot Phoenix CC’s Richard Gildea into second place in a field of 34 riders.

Gildea was 20 seconds quicker than veteran David West of Salisbury Road and Mountain CC who placed third with a time of 59.37 – enough to make him fastest veteran.

The two next quickest riders – Neil Mackley and Rich Hunt – are also veterans and all went under the hour-mark.

Six female riders completed with a3crg veteran Sarah Matthews quickest in 1:09.59. Second on the women’s podium was Fareham Wheelers CC’s Kirsty McSeveney in 1:11.17 and third was Hermione Harrison of Oxford University CC in 1:11.56.

The course started in Faberstown before heading out towards Dales Wood/Bourne Park Airfield and on to Hurstbourne Tarrant and Tidcombe. The riders then followed the A338 to the finish near Collingbourne Ducis.