CAMS Racing and Ribble Weldtite Pro Cycling blew away their competition to seal victories in the men’s and women’s races at the RTTC National Team Time Trial Championships in Scotland.

Returning men’s champions from 2019 Ribble Weldtite Pro Cycling placed first and second over the out and back course.

The team of James Shaw, Dan Bigham and Simon Wilson stomped to victory with a time of 54 minutes and one second over the 31.5 miles course. 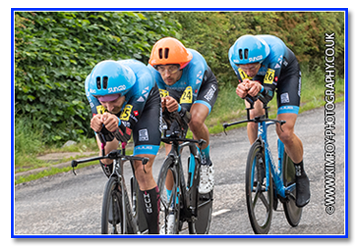 Last year’s event was cancelled due to Covid-19 but Bigham and Wilson were also part of the retaining Ribble winning team in 2019.

The team of Hayley Simmonds, Natalie Grinczer and Megan Barker clocked a time of one hour, five minutes and 14 seconds to take the title.

Riders were met with perfect conditions for the event over 31.5 miles which was held in Scotland for the first time.

The event saw teams complete two laps of an out and back course along the A78 between Eglington Country Park past Irvine before a drag to the turn at Troon before the return leg and repeating the course.

Roadworks on the course almost ended the event, but for highways company Amey who moved hundreds of cones allowing the event to be held before returning them back in place.

The winning Ribble Weldtite Pro Cycling trio, who all raced the Tour of Slovenia earlier this month, recorded an average speed of 55.9 kilometres per hour of their way to sealing the title.

The victors were a minute and 31 seconds ahead of their team-mates at the halfway split before eventually posting a time of 54-01 and finishing 2-22 clear.

The second-placed Ribble team of Zeb Kyffin, Joe Wilson and Matt Gibson had posted the fastest time of 56-33 but could only watch as their team-mates smashed their mark.

AeroLab Ward Wheelz would have finished second, but a one-minute late start time penalty meant that Tom Ward, William Perrett and Rob Walker had to settle for third in 57-17.

“It was good and we were fairly happy with it,” said Shaw who took his first open national time trial title. “We had a bit of a chat before about how we were going to pace it. All in all it was a pretty successful run.

“We worked out a little bit how we would work to each person’s advantage, so we weren’t wasting people unnecessarily really.

“We got a good run of roundabouts as well, so we were fairly traffic free, we worked really well and were really smooth.”

Simmonds, who also won the National Circuit Championships earlier this month won her second national title with her CAMS Racing side.

The Army Cycling trio of Christina Murray, Jenny Hill and Rebecca Graves started three minutes ahead of CAMS Racing and despite being caught and passed by their challengers they led the fight for second in 1-12-34.

“It was the first time CAMS have ridden so it was really nice to enter, get a good team together and get the win,” said Simmonds. 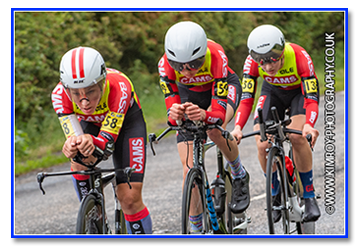 “We had a training session a week ago and then obviously we rode a bit together yesterday (Saturday) as well, it went really well today.

“It was pretty nice, it rained a bit this morning so there was a bit of water on some bits of the road, but they dried up nicely and during the event it was dry for us and pretty low wind so it was quite good conditions.

“It was a pretty flowing course and you could just be on the gas the whole time apart from the turns.

“I have only raced the team trial championships once, I ended up getting a puncture and we ended up not finishing.

“We weren’t 100 per cent sure how much we were going to be pushed or how comfortable it was going to be. We hoped we would be able to get the win if we rode well together and obviously we had a really smooth ride with no problems and

“I’m hoping to have some more CTT national titles later this year, but it’s nice to have two from two.”