A true all-rounder, Caitlin Peters (Storey Racing) took medals in all three of the National Time Trial Championships she entered last term and is now preparing for her first year in the senior ranks.

The 18-year-old from Fareham clinched her first National Hill Climb title to wrap up the Champion of Champions title, the award for junior women over three National Championships, along with the British Best All Rounder (BBAR) crowns.

Her campaign included a silver medal in the National 10 and bronze in the National Closed Circuit Championships along with clocking personal best 10-mile (21.13) and 25-mile (54.19) times.

“I think to top it off with the National Hill Climb at the end made it really special,” said Peters. 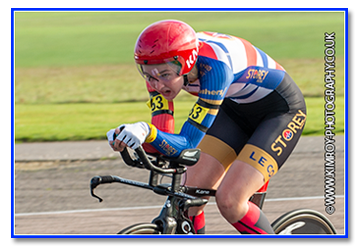 “I wanted to do a few more National events but for one reason or another it wasn’t possible. So to be able to be Champion of Champion as well as the BBAR was really special.

“Also to break the BBAR average speed record is something that I’m proud of.

“Originally at the start of the year I thought I might go for the BBAR as it’s something I’ve won in the past. Then coming into the National Hill Climb I knew the Champion of Champions was within reach.

“That was my first hill climb for about three or four years and I really enjoyed it. The event was really inspiring and there was so many people shouting my name and I had no idea who they were.

With just the 10-mile and 25-mile disciplines counting for the girls BBAR, Peters had been focusing on the shorter disciplines.

However, after moving into the under-23 age category she is looking forward to testing her legs over the longer distances in the next few years.

“I’ve been doing time trials for three or four years and my first ever ten I just wanted to break the 30-minute mark, I’m not sure,” added Peters

“Because I’m a senior rider next year it will be harder to target National podiums, so if I can break into the top-ten I would be happy with that.

“I would like to better my 10 and 25 personal best and I will probably have a go at a 50 if I can find a course that I’m comfortable to ride near the area I live in.

“I’ve raced more 10s than 25s but I’m probably better over the longer distances. The 10 is more enjoyable as it’s over quicker but stamina is my strength so the 25 is better as it’s longer. I’m interested to see how a 50 would go with the pacing.

“The BBAR is different from a junior and to qualify you have to race over longer distances including the 100. If I apply it will be a few years off as they are distances I haven’t ridden yet.

“I would love to do the National Closed Circuit Championships at the end of October as they are local to me. I will probably start on the road this year and move back to time trials to finish.” 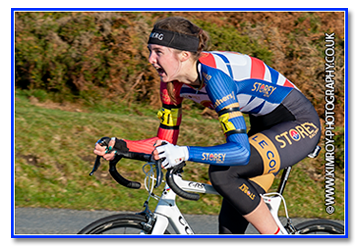 After signing for Team Torelli she is hoping for more international experience in both disciplines next season.

She added: “I’m a first year under-23 next year so it will be harder to target National events, but it will be a challenge to step up.

Peters has grown up around racing and starting winning races shortly after her eighth birthday on the Mountbatten Cycle Centre in Portsmouth.

“My dad took me down Mountbatten Cycle Centre when I was five-and-a-half and he basically let me loose down there,” added Peters.

“My dad inspired me to take up the sport but doesn’t push me if I don’t want to do an event.

“I have been doing road races longer than time trials and I really enjoy it. I find in time trials a lot of people stick to power and you can almost predict what time you are going to get.

“Meanwhile in road racing there are so many different variables which makes it more interesting and different circuits.”

“At Mountbatten people have seen me grow and I’ve seen other people grow like Joe Truman and Dani King who are from the same background. So you see how far they have got which is inspiring.”

* All reports are copyright of Cycling Time Trials/Snowdon Sports. Not to be used without permission. This report by Ben Goddard.