Fennell and George both take victory for The Independent Pedaler

Chris Fennell and Jennifer George were fastest male and female respectively as The Independent Pedaler-Nopinz won the two main categories at the National Circuit Championships in Buckinghamshire on Sunday.

Promoted by London North District, the event used three laps of a nine-mile circuit near Mentmore and also doubled up as the final round of the Merlin Cycles Classic Series.

Fennell added to his win at the National 25-Mile Championship a week earlier by taking victory in the men’s event with a time of 58-28, but his margin of victory was only five seconds and it took a big push on lap three to overcome the challenge of Ollie Hucks (Saint Piran) who had been fastest over the first lap but couldn’t quite hold on.

Fennell’s team-mate at The Independent Pedaler-Nopinz, Jennifer George was a convincing winner in the women’s title race, winning by almost two and a half minutes in a time of 1-06-12.

She was 2-25 ahead of runner-up Laura Davies (Orwell Velo), while third fastest female was Ella Coleman (AWOL O’Shea Worx) in 1-09-35.

“I didn’t know if I was down or up on the other guys, I just kept pushing,” said Fennell. “I’m glad my legs turned up for the third lap, by then I was in a good flow.

“I rode the course the day before, did a couple of laps to get a feel for it as it’s not a course I know. It was nice and sunny with just a light breeze. I’ve ridden against most of the other guys before, so I knew the competition would be strong.”

And fastest woman Jennifer George said: “I really enjoyed that course, it was so cool! It had everything I like about riding my bike, a bit of everything. I was focussed on my power output and kept that as stable as I could, while pushing harder into the wind.” 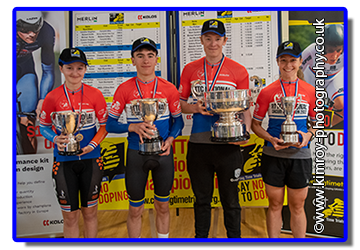 The event doubled up as the final round of the Merlin Cycles Classic Series, where riders needed to compete in at least four events to qualify.

The overall men’s title went to James Lowden (WattShop) who clocked 1-03-59 in the final round, placing ninth on the day.

The prize for the fastest veteran on target time overall went to Malcolm Smith (Peterborough CC) who clocked 1-04-48 for round six which gave him a plus of +15-04.

* A gallery of images from this event is available here