Hayley Simmonds (CAMS Racing) added another national title to her collection winning the Women’s RTTC National 25 Mile Championship by over a minute.

The 33-year-old recorded an average speed of over 29.8 miles per hour in wet conditions to win in a time of 50 minutes and 19 seconds.

She added the 2021 title to her National Team Time Trial and National Circuit Championship crowns already won this season.

“It was really good and I felt good today,” said Simmonds.

“It was nice to get a good margin in the women’s event and also beat the winning junior man by one second which was also quite nice.”

The L2529 sees riders start outside Keswick before heading on the A66 out and back to Cockermouth and back with a section running alongside Bassenthwaite Lake. 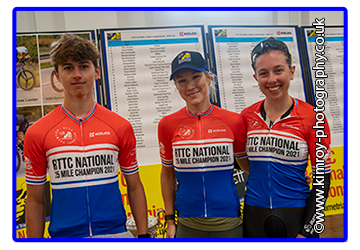 Scratch rider Simmonds won the C.C Breckland 25 on her last outing posting 51-27 but went over a minute faster on this occasion to win in a season-best open time of 50-19.

Despite suffering a puncture resulting in a wheel change and a host of lost time Jennifer George came home in 1-19-42 for the third counting rider to give The Independent Pedaler – Nopinz the team prize.

Sally Turner (trainSharp) was the quickest veteran on scratch posting a time of 54-56 for seventh overall.

Erica Booth (Lancashire RC) was second veteran on scratch in 56-38 while Deborah Moss (Team Merlin) was third in the age category (57-31).

“It’s nice to be able to get the National 25 title back,” added Simmonds.

“I’m really happy with the ride. The road is quite nice and generally quite a good surface, there are two roundabouts but generally it’s quite a quick course,

“There is a section in the middle where the two carriageways split which is a little bit windy but otherwise it’s quite a good power course.”

Simmons will be looking to add the National 10 Mile Championship to her collection in September while also planning to compete in local events.