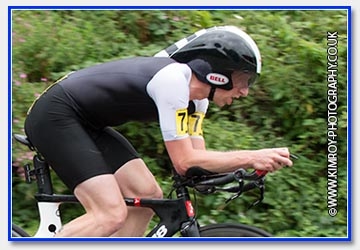 Wright, the 33-year-old from Great Bookham in Surrey, clocked 19.51 for the H10/8 at Bentley, giving him the win overall by 16 seconds from Team Bottrill veteran James Rix, while third spot went to Alan Murchison (Drag2zero) who was another 18 seconds off the pace.

Meanwhile in the women’s category, Gill clocked 23.42 to win by a convincing 2-26 from Twickenham CC veteran Helen Gravatt, while Kirsty McSeveney (Fareham Wheelers) was third.

It was the latest in a long line of 2017 victories for Pat Wright, who had tasted victory in open events on eight other occasions through the season.

He won the Brighton Mitre CC 25-mile event back in October, as well as the Sussex CA 25 in August. The last time he won on the same H10/8 course as the Farnborough and Camberley Cc event was back in May, when he clocked 19.34 to win the North Hampshire RC 10.

Vicky Gill doesn’t ride open time trials that often – her last ride was the National Closed Circuit Championship where she was 16th fastest female back in October.

Meanwhile, the tandem event was won by Fairly United CC duo of Peter Oliver and Christopher Edginton who clocked 22-53 to win by more than two and a half minutes from junior Luke Carter (Hounslow & Dist Wh) and Robbie Richardson (Chippenham & Dist Wh).