Dan Bigham (Brother NRG-WattShop) powered to victory in the men’s National 25-Mile Time Trial Championship, taking to seven the number of national titles he has won so far in 2017.

The 25-year-old from Stoke on Trent clocked 45.40 for the R25/3h course in South Wales, giving him the win by 19 seconds from Tim Cartwright (Newbury RC), while defending champion Ryan Perry (Raleigh GAC) had to settle for third spot, a further 12 seconds off the pace.

Despite not placing any riders in the top five, Team Bottrill-HSS Hire trio of Matthew Smith, Stuart Travis and John Dewey won the team prize, clocking 2-21-19 to win by just 24 seconds from Brother NRG.

“I had good legs today, and I was able to ride hard,” said Bigham. “I knew it would be hard out to the turn with a headwind so I rode hard out to make up some time, then I sped back to the finish.

“I paced myself well and was ready for a good hard ride. I won the Hoops three-day stage race last weekend, I won the time trial stage and held the lead from there, so I knew I was going well.” 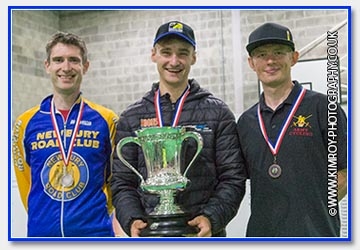 His focus now switches to the UCI Track World Cup, although Bigham said he will still ride the National 10.

Meanwhile, defending champion Perry said: “Racing has taken a backseat for a while now as I’ve just become a father, but I’ll be back next year and will have more time for time trialling.”

The R25/3h is based near Rhigos and largely uses the A465 dual carriageway in the picturesque Vale of Neath.

After starting on a minor road near the Hirwaun Industrial Estate, riders turn West and power along through Glynneath and Resolven, before turning at Aberdulais and heading back up to a finish just to the east of Glynneath.