Walker, 16 and from North Yorkshire, clocked a personal best time of 48.52 to take the win in the boy’s event, 26 seconds ahead of his nearest rival Harrison Wood (Mid-Devon CC), while Lyster Romero (TBW Bottecchia Wigmore RT) was third, another 50 seconds slower than Walker.

And Gloucestershire-based 16-year-old Pfeiffer Georgi (Liv CC-Epic Coaching) was crowned the girls champion, having covered the R25/3h course in 54.51.

That gave her victory by an impressive four and a half minutes from runner-up Caitlin Peters (i-Team CC) - who was first juvenile at just 15 years of age - while third went to Savannah Hewson (Liv AWOL).

Walker’s win is all the more impressive given that he has a degenerative spine condition, and had an injection in his back last November to try to keep the condition under control.

“My previous best was a 55-59 done earlier this season, so I’m pleased with my time and the win,” he said. 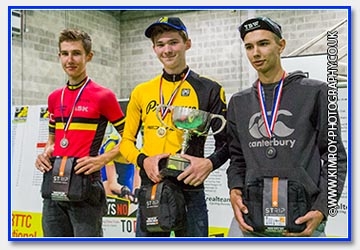 “The conditions were pretty good, it’s a good course so I may be back as I’m going for the 10 and 25-mile junior competition records as well as the National Youth Championship and the open 10-mile championships later in the season.”

The R25/3h is based near Rhigos and largely uses the A465 dual carriageway in the picturesque Vale of Neath.

After starting on a minor road near the Hirwaun Industrial Estate, riders turn West and power along through Glynneath and Resolven, before turning at Aberdulais and heading back up to a finish just to the east of Glynneath.

* A full gallery of images from the Junior's and Women's championships by Kimroy Photography is available to view here.