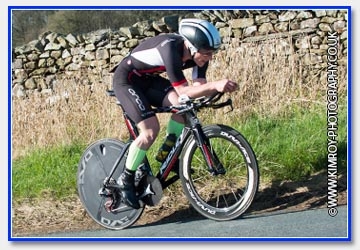 Philip Graves made it two wins in a row with a comfortable victory in the Ravensthorpe CC 10 on Saturday.

It comes hot on the heels of the triathlete’s win over 50 miles in the Nelson Wheelers CC event last weekend.

The NOPINZ rider was the only competitor to complete in under 20 minutes and only just, powering round in 19.59.

Graves was 1.29 quicker than second-placed rider Richard Sharp of York Cycleworks who made it back in 21.28, just four seconds ahead of third-placed Richard Dean of Team Swift.

The top five were all very competitive with SSLL RT’s Alastair Wareham and York Cycleworks’ Ed Nicholson both within three seconds of a podium place. There was some small consolation for Nicholson though – he took home the veteran prize.

Wareham also took a prize home after teaming up with fellow SSLL rider Jon Surtees to pick up the 2-Up winners medals with a time of 21.10.

Richard Sharp and Christophe Demoulin of York Cycleworks were second in 21.18 and mixed-club duo of Pete Nixon (Seacroft Wheelers) and Ed Nicholson (York Cycleworks) were third in 21.19.

Back in the solo competition, the fastest woman on the day was Fiona Sharp of York Cycleworks in a time of 24.48. She was exactly a minute quicker than second-placed woman Maria Mulleady of Team Swift who completed in 25.48.

Host club Ravensthorpe CC did place a rider on the podium with Sue Spindler being the third fastest woman in 62nd place overall, with a time of 27.59.