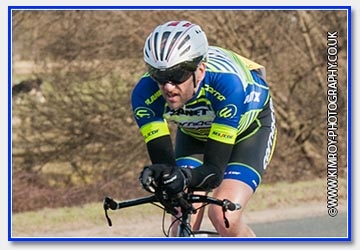 Morris, 39, clocked 35.29 to take victory by 31 seconds from Pete Tadros (In Gear-Quickvit), while George Welfare was one of three Eastbourne Rovers riders next in line, taking third spot with 36.24.

Meanwhile, Summerford secured powered to victory in the women’s category, adding to the win she secured earlier this year in the Southborough and District Wheelers 10-mile time trial on New Year’s Day.

She clocked 41.04 to win by 1-53 from GS Stella’s Sally Turner, while Lisa Davis (Lewes Wanderers) was more than five minutes back in third.

Morris is no stranger to the podium, having won the Eastbourne Rovers 25 last August, where Summerford was also the fastest female.

Teaming up with Tom Glandfield, Morris placed second in the Lewes Wanderers two-up 18 last October, and was also second, this time as a solo, in the East Sussex CA 100 last July.

Similarly, Summerford has several wins under her belt from last season, and is aiming to claim more victories in 2017.

As well as her New Year’s Day victory, she won the Brighton Mitre CC 25 last October, as well as the Eastbourne Rovers 10 and 25 and the Bec CC 25 last August, plus the East Sussex CA 10 last September.