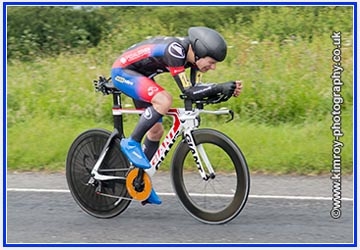 While the overnight prediction of snow held off, riders were still faced with cold and damp conditions and a sub-zero wind chill as they tackled two laps of the course from Hungry Hill to East Clandon and West Horsley.

Given the forecast, both winners had opted to forego some speed for staying warm, with Dewey sacrificing aero gains in order to maintain feeling in his fingers and toes and Lethbridge going for full thermal winter kit under her skinsuit and three pairs of gloves.

For Dewey it was a superb start to the season, recording a time of 30.07 to break the course record by 24 seconds, though he nearly failed to make the start after a last minute rear puncture.

Dewey said after the race: “Shortly before the start my rear tube popped, leading to a frantic fumbled change of inner tube.

“I was delighted to win with a new course record, and be awarded some great artwork designed by Dominic Trevett from the organising club.

“The race was excellently marshalled by Kingston Wheelers and passed with only a few trips into the ‘famous’ potholes. The first win of the season for Team Bottrill!”

Rob Sharland (Paceline RT), winner of this event for the past three years had to settle for second this time round, despite also breaking his previous course record with a time on 30.11.

Despite narrowly missing out on the win, Sharland was happy to run Dewey so close. Liam Maybank (Twickenham CC) recorded a time of 30.45 to take third overall and fastest veteran on standard. There was also an impressive ride by Paceline’s Paul Moore to finish first road bike and 10th overall.

Lethbridge finished 16th overall, more than eight minutes ahead of her nearest rival to complete a hat-trick of victories in this event - but like many she struggled in the cold conditions and recorded a time somewhat slower than 12 months ago.

“It was touch and go whether I would ride today given that I don’t cope well with the cold and I’d had to miss training at the end of last week due to illness,” said Lethbridge. “But this has been my season opener every year since I started time-trialling properly and it’s one of my favourite events.

“It’s just a shame the weather put off most of the other women, though I don’t blame them really as it took me about six hours to warm back up! I’m really looking forward to the season ahead with Drag2Zero as my winter training has been going well.”