The 33-year-old took the win by almost two and a half minutes, with Scott Davies (Team Wiggins) second with 46.33 while Steve Irwin (North Lancs RC) completed the podium in third with 47.01.

Although it was a fast day it was not perfect, with swirling winds causing problems for the riders.

“I was feeling OK but not great, I was perhaps a bit tired after Saturday’s ride,” he said. “It went smoothly, but it wasn’t a fast day. It was a bit windy both ways too, so I wasn’t sure I would get the record.”

The result and the two records he has broken have shown that Bialoblocki, a Polish rider who has lived in Somerset for several years, is coming into form for the European Championships next week and also the World Championships later in the year.

In other categories, Newbury Road Club’s Rachael Elliott (pictured) was the fastest female with a time of 51.51 which gave her the win by 3-20 from Chris Melia (Born to Bike), with Danuta Tinn (Maidenhead and District CC) third. 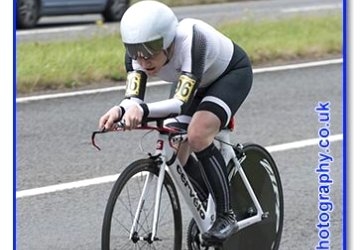