The 32-year-old has turned his focus from mountain biking to hill climbing over the last two seasons with successful results including a first and second in the national championships.

Bell, from near Harrogate, says that the atmosphere at events prevent them from becoming too serious or closed off.

“First of all it’s a good spectator sport,” said Bell.

“People at the side of the road can see real kind of effort and grit right there in front of them with riders coming up every minute or 30 seconds which is part of it.

“I think it’s just a nice grassroots appeal about it. Everyone is pretty serious and want to do the best ride they can.

“But there is a very light-hearted atmosphere. It is hard to go too serious or closed off because there is this set up where the headquarters is in a community centre or a Methodist church. 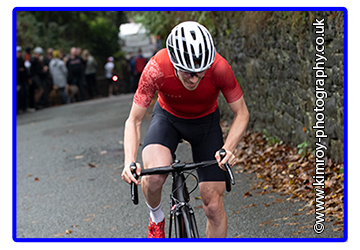 “It’s just very low key. I think people who do hill climbs have a bit of an awareness that it’s a bit strange.

“It’s a bit of a weird thing to want to do. To stand there in the winter stationary and then go into this maximum effort for three or four minutes, I think everyone kind of knows it’s a little bit weird.

“I think there is a bit of a fondness around that.”

Bell won nine events last season including storming to victory in the National Championships on Winnats Pass with his time of three minutes and 1.6 seconds some seven seconds clear of his nearest rival.

Bell who was only beaten twice during the hill climb season, both times to former national champion Andrew Feather, said it was an almost perfect season.

“I think I pretty much had every race go just as I wanted,” said Bell.

“If I was to single out one I don’t think I got completely right was the Buxton CC event on Bunsall Cob where I was second to Andrew [Feather].

“In hindsight I held back a little bit too much. But it wasn’t a terrible result by any means. Other than that I was happy with how every other race went.

“Overall I was definitely happy with the season.”

One of Bell’s favourite climbs in the Jackson Bridge climb which he holds the record on Strava of 4-35 some 26 seconds faster than his nearest challenger.

“I haven’t really had many full seasons except last year and this year,” added Bell.

“I’ve always like Jackson Bridge before which is a bit of a classic climb and where I grew up. It’s always one I’ve done a lot in training and then I’ve done it quite a few times in hill climbs.”