FEATURE: Scupham one of many planning for season ahead

Louise Scupham is one of thousands of time trial riders across the country preparing to return to competition as the Covid-19 lockdown eases, and she is hoping to continue the form she found last season in the opening weeks of the time trial season.

The time trialist turned road rider enjoyed getting back to her roots last season, finishing tenth in the National 50 and winning some local events.

The 23-year-old from Scarborough will be mixing time trials with riding for UCI Continental Team AWOL O’Shea on the road again this season, and she will be kick-starting her season in the RTTC Classic Series event on the Shropshire-Cheshire border on April 2.

“The Classic Series is one I really want to do all the rounds every year,” said Scupham. “I really like the sporting courses as they are more interesting and it’s something to get your teeth into.

“I set out to do all the rounds and find that I maybe only do one or two with other race commitments. 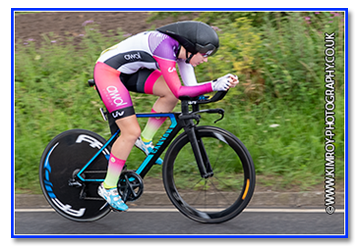 “I’m hoping that the road races will fit in a little bit better this year so I can do more of them. Especially as I had some decent form last year and can hopefully carry it into this season.”

A week later Scupham will be testing the new V7113 course in the Vive Le Velo 10 near Market Weighton in Yorkshire.

“I’m looking forward to riding that as it’s a new course,” she added.

“I’m not saying it’s a replacement for the V718 but they were looking at other options in the area, nice and flat course with big and wide roads.

“I like it when the roads are wide as it gets rid of that close pass issue.”

Scupham graduated from university in June and said that the Covid-19 lockdown has allowed her to focus on bike riding once again.

“I was kind of surprised with how last year went,” she added.

“I got a new coach in April. I had been coached all through my junior years by Pete Read who is a bit of a legend in the time trial scene.

“But he unfortunately passed away last February and I found I wasn’t able to coach myself so found another local coach, Adam Hardy from Sports-Lab, who I’ve worked really well with.

“He has really brought me back to feeling like a racer again, not just someone who is trying to balance everything with my academic life and cycling.

“Lockdown really benefitted me last year as I finished my degree and there was no real push to do anything else but cycle at that point.

“It allowed me to get back the fitness I had lost by focusing on my dissertation as I hadn’t been back on the bike properly for a couple of months at that point.

“It was a nice uninterrupted block of training which I haven’t really had since I was at school. If anything it’s helped me out.

“It was just a really good season to start to feel the same kind of form that I was in during my last year as a junior.

“I’m spending a lot more time actually riding the time trial bike this year. I think I’ve always had this thing in my head that it’s the best bike and should only come out in races.

“I found when I was racing regularly on it last year it was a real help to just spend a lot of time in the position.

“I know the last couple of years mixing road and time trials I’ve just not spent much time on the time trial bike and I’ve suffered for it especially in the longer races, so I’m hoping to be able to do some better 50-mile performances if I just spend a bit more time on the bike.

“I started in the sport through time trials so last year was really quite refreshing to just go back and do a time trial season, I really enjoyed that and it’s something I’ve been missing in the last few years trying while to balance road and time trials.

“It’s much easier to focus on just one. I do enjoy the flatter road races and I am more of that power profile than on a hillier race.

“Time trials are really helpful, you build a strong 20-minute power and it helps on all sorts of terrain.”

Scupham said a highlight in her 2020 season was a tenth place finish in the National 50 in October clocking a time of 2-10-33.

“I was really happy with that,” she added. “I know with it being so far up north quite a few of the hitters didn’t travel for that and equally there were people out with injuries.

“Generally it’s been a long time since I’ve done a 50 and felt decent.”