National Hill Climb champion Andrew Feather is preparing to be pushed all the way again this season and says the margins between the top riders are tiny.

The 36-year-old, from near Bristol, recorded a perfect season last year winning all 15 of his events and picking up his second national title.

Despite dominating the hill climb season Feather says that the national championship was a ‘clean slate’ and a host of riders could have beaten him to the crown on Streatley in West Berkshire.

“I’m really pleased, obviously it was really tight margins and the last race could have gone either way really,” said Feather. 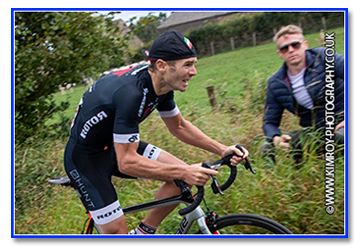 “I won 14 out of 14 [before the event] and there was almost an expectation that I was favourite to win, but then again I knew the margins were going to be very small so there was no level of comfort really.

“You’ve just got to think that anyone could get it and that’s what happened, anyone could have won it really.

“Fortunately I was that one second quicker than anybody else. In 2018 I won by 1.7 second and this year it was 1.1 second so it just shows that the margins on such a short climb are so small it’s just the click of the fingers really.

“It shows that everything counts; weight, the bike, equipment, everything really. It’s all got to come together on the day for you to be successful I think.

“I just saw it as any other race, if you go into it thinking you’re favourite having won 14 out of 14 and it’s a given that you’re going to win the next one, you’re going to shoot yourself in the foot.

“I think it’s best to think of it as a clean slate really. It’s obviously nice and in the back of your head that you’ve done well throughout the year, but you’ve got to treat it like any other race and go out and do your best.

“Especially at the nationals as everybody comes together and it’s nice that all the favourites are there really.

The Covid-19 pandemic meant that competitors had a different preparation to events last season.

Feather said that working from home allowed him to put in more specific training last season rather than his usual commute to work.

“It was probably a little bit easier this year in the fact training was slightly different,” added Feather.

“Normally it’s just commuting to work during the week so no real efforts but this year I was able to get out for a couple of hours each day and do more specific efforts.

“It was easier to train as I had more flexibility with how I arranged my day with work and I wasn’t cycling with my backpack on which I normally would be doing throughout the year.

“I typically ride a few hours each day with a few hill climb efforts and there’s nothing more to it than that and I don’t go into the numbers. 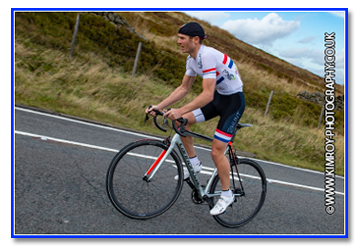 “I’ve got a power metre and track my performance so know I was going well last year in terms of my numbers and I was hitting my peak power on various climbs.

“It’s always the same and in the winter I don’t really care what I eat. I don’t think there’s any harm being a bit heavier in the winter and having a bit more to carry up the hills, maybe it’s good training.”

Feather’s remarkable campaign was documented this season as a camera crew from Global Cycling Network (GCN) followed his journey through the hill climb calendar.

“We did lots of filming before and after races,” added Feather.

“So that will be interesting to see as I haven’t watched it yet and won’t until it’s released. That will be quite funny looking back at it all.

“I also did a week in the Lake District as I was up north for two consecutive weekends doing hill climbs so visited the area with the family.

“We did some filming on the Hardknott Pass and it was quite good, I got the Strava KOM on there which was good.”

Feather is preparing to defend his national crown this season and will be looking for new climbs to test himself on before concluding his campaign on Winnats Pass in October.

The 36-year-old says he hopes to compete for a ‘couple more years’.

“At some point somebody will come along and beat me or age will start kicking in,” added Feather.

“It’s all really close at the top and I’m not head and shoulders above anybody else. If you look at the results 15 out of 15 wins might suggest that but if you look closer at the times you see the times are really small margins.

“I’m not winning my huge margins. I don’t think there is any space to sit back. You just have to keep doing your best because everybody else is nipping at your toes.”

Feather will be hoping to take his third national crown on the Winnats Pass climb in the Peak District.

It’s a climb Feather knows having set the KOM on the Strava segment when he visited in August last year, clocking a time of 5 minutes and 26 seconds over the 1.71-kilometre segment with an average gradient of 11.2%.

Feather knocked 27 seconds off the previous best time on the segment, but he expects the nationals course to be shorter.

“It’s an amazing climb,” Feather added. “I rode it for the first time last year when I was in the Peak District and it’s really good. The whole climb is about six minutes, but they take a section which the course record is three minutes 11 seconds I think.

“It will be really good and whoever wins will be a worthy winner. It’s really steep, the average is 13%.

“It’s really iconic as the National Hill Climb hasn’t been held up there in 44 years, it used to be held there a lot in the 1960s and 70s.

“But then the road collapsed and it became too busy with traffic to run a hill climb up there because it’s a single-track road.

“The organisers have done a great job to get the road closed and it’ll be fantastic. I think it will be really tight as it’s still only three minutes 15 for the win.

“It will come down to the day really, who is physically strong, fit and mentally in the right mindset.

“I think the mindset especially in hill climbs is really important to being successful. Having a calm and collected approach really, not panicking and going off too fast is my kind of method anyway.

“I would love to see the national held at some point on a longer climb, a really tough climb like the ones we did in the Lake District - something really steep and really long.

“I think it would be nice to see a completely different climb like that, but whether that will come about I don’t know.”