Don't Look Back in Anger: This time last year

Teamwork was key to success this time 12 months ago as the National Team Time Trial Championships took centre stage.

The Team Ribble Pro Cycling squad consisting of Dan Bigham, Simon Wilson and John Archibald put in a commanding performance around the 30.9-mile Cheshire course finishing in 57 minutes and 43 seconds to take the top prize. 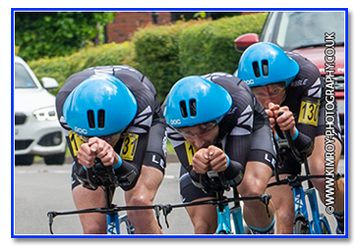 The women’s competition saw an equally impressive ride by Emma Lewis, Emily Meakin and Joscelin Lowden to take Team Independent Pedaler to the title in 1:05.47.

Young sisters Elynor and Zoe Backstedt were joined by Sarah Storey on their way to second for Storey Racing (1:08.48) with their team-mates finishing third.

Elsewhere, Adam Duggleby (Vive Le Velo) remained in fine form as he stormed to a clear win in the Viking 50 on the fast E2/50c course near Cambridge.

Scratch rider Duggleby clocked an average speed of 30.7 miles per hour on his way to setting a winning time of one hour, 37 minutes and 27 seconds.

In the women’s category Alice Lethbridge (DRAG2ZERO) continued her run of form and clinched victory in a time of 1-49-07.

Those looking for a good time over a longer distance headed to the Welsh 100-Mile Championships at Raglan near Abergavenny.

After finishing third the previous season Christopher Gibbard (Bynea CC) went two better in 2019 to clinch the national honour in a time of three hours, 35 minutes and 10 seconds.

Meanwhile, a big field headed to Cumbria for the Kent Valley RC 10 Saturday evening event, with the chance of riding a 25 hosted by the same club the following morning.

Veteran Douglas Watson took a clear win on the Levens 10-mile course recording an average speed of almost 32 miles per hour on his way to setting a time of 18-47.

The following morning riders gathered again near Levens for the Kent Valley RC 25.

Erica Booth (Lancashire RC) was star of the day when she broke her own course record by over a minute to win the women’s event in a time of 57-46.

Another women’s course record was broken in the sporting Chelmer CC 25 with host club rider Lauren Kirchel knocking over four minutes off the previous mark to finish in 1-01-58.

* All reports are copyright of Cycling Time Trials/Snowdon Sports. Not to be used without permission. BG